SIStory | Radi Stambolov: About the Sweet Lesson From Unconventional Business

As an experienced restaurateur, chef and writer, Thomas Keller shares that “A recipe has no soul. You, as the cook, must bring soul to the recipe. “Does this apply to the relationship between a startup and its founder, will be revealed by the guest lecturer at the December edition of the series SIStory (Successful Inspirational Story) – Radi Stambolov. He is a pastry chef enthusiast who, with remarkable energy and inimitable zeal, fights for the education of young cadres in the culinary art, the preservation of the Bulgarian cuisine traditions and at the same time, for the entry of the global trends in our country. Under the title “About the sweet lesson from unconventional business” the event will share secrets from the kitchen and reveal real experience from entrepreneurial experiments, how to attract new interest in the already well-known and how to win at the game of senses. 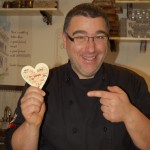 Radi Stambolov is familiarly known as a member of the jury of the first Bulgarian culinary competition “Lord of the chefs “- recognition, received by the best. Radi graduates from the confectionery school “Hristo Nikov “. As a student he signs a contract with “Interhotels”, as a condition for his graduation. After the graduation he is allocated to hotel “Sofia”, where chefs however refuse to take trainees. That is how he finds himself in “Sheraton” in the early 90s. At that time, “Sheraton” is one of the few luxury hotels, where are organized cocktail parties and receptions at a high level. The brilliant career development of Radi Stambolov paves his way to vice president of Euro-Toques Bulgaria since its establishment to November 2011. Alongside this he continues his training and qualification: graduates from the College of Tourism in Varna; acquires readership in Italian cuisine from Scuola Alberghiera e di Ristorazione di Serramazzoni, Italy; specializes in Cafè Central Palais Ferstel in Vienna, Austria. He has worked at the Sheraton Doha Hotel, Qatar, as Chef de Party (Pastry), subsequently promoted to the position Souse Chef Pastry. He has cooked for 13 presidents of different countries! Radi’s great passion is chocolate. He constantly experiments with new technologies, applying them successfully in his two sweet workshops – pastry “Gavroche” and the chocolate shop RS Chocolatier where having a cup of hot cocoa, connoisseurs can (re)discover unique combinations and flavors of chocolate. ” One of his latest personal projects that became a thriving business is … the production of chocolate sushi. Yes! Indeed sushi, just like the original, except that it is made of Chocolate. And it is produced in Bulgaria. And being sold on five continents! And on the question whether it contains rice, Radi smiles – “No, you do not expect from me to present you rice-pudding, right?

2 replies on “SIStory | Radi Stambolov: About the Sweet Lesson From Unconventional Business“