Patron and guest speaker at the first story of the series “Successful Veliko Turnovo” will be the Mayor of Veliko Tarnovo Eng. Daniel Panov.
Sharing the story of their first steps, the mayor will find what problems encountered and how they overcame. The first of its kind event will hear what is to plunge into the business world immediately after graduation. He will tell us about his career ups and downs – what brings success and what it teaches failure. 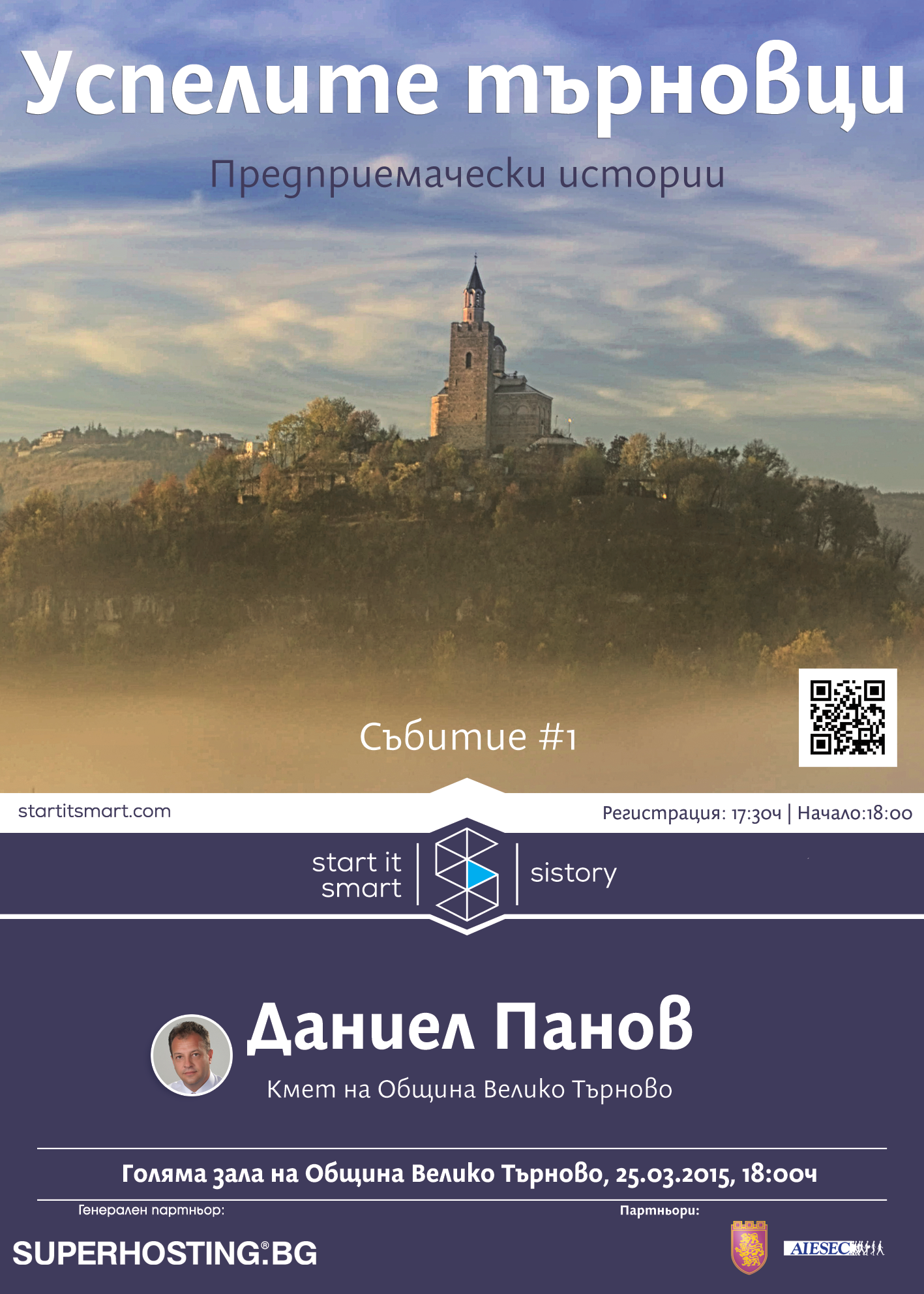 What is the environment for entrepreneurship in Bulgaria through the eyes of Daniel Panov? Is there really a future in tourism? Which areas are suitable to start a business in Veliko Tarnovo, along with advice to young find only SIStory to Start It Smart | Veliko Tarnovo.

Eng. Daniel Panov was mayor of the best city to live in Bulgaria – Veliko Tarnovo!
Behind his back he has an impressive career in the field of culture and tourism.
After years of experience became manager of the municipal tourist company “Tsarevgrad Tarnovo”, where he worked in perfect coordination of drawing up common tourism products and itineraries in the old capital.
He was the initiator of the first major projects won in operational program “Regional development” of Veliko Turnovo Municipality – Development of tourist attractions and promotion of innovative cultural events worth about 6 million lev! Panov was involved in developing and managing multiple projects financed with EU funds.
Thanks to him is restored and successfully developed unique for Bulgaria opera festival under the open sky “Stage of the Ages” that attracts visitors to the city from all over Bulgaria and other parts of the world.
Daniel Panov active activist and participant in leadership positioning in many organizations such as BHRA, BATT, member of the Management Board of the European Institute of Tourism – the organization that is the only Bulgarian partner of the World Tourism Organization in the development of expert partnerships and education tourism.
Chairman of the organizing committee of the International exhibition “Cultural tourism”.
Winner in 2009 of the prize of the STA for contribution to the promotion of cultural tourism, the next year he received a personal award from the Minister of Economy, Energy and Tourism for the management of architectural-ethnographic complex “Samovodska bazaar.” He received the distinction of MEET manager of tourism on the occasion of 25th anniversary of audio-visual show “Sound and Light”.